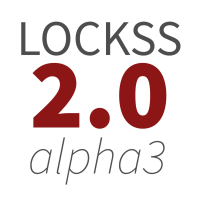 The LOCKSS Program is pleased to announce that LOCKSS 2.0-alpha3, the third publicly available prototype of its next-generation distributed digital preservation software suite, is now available for testing. LOCKSS 2.0-alpha3 is a technology preview, not intended for production installations.

In order to install the LOCKSS 2.0-alpha3 system, you will need:

If you were running LOCKSS 2.0-alpha2, you no longer need Docker1 nor Java 8 installed on the host machine.

Please contact us for questions, feedback and bug reports. Open a ticket by sending e-mail to lockss-support (at) lockss (dot) org. Your contribution toward the final LOCKSS 2.0 release is very important to us and greatly appreciated by the community.

The LOCKSS 2.0-alpha3 system consists of a configurable set of the following components:

I have an existing classic LOCKSS system (version 1.x). Can I upgrade to LOCKSS 2.0-alpha3?

Yes. You are welcome to wipe your testing data from LOCKSO 2.0-alpha2 and start from scratch, but there is an upgrade path from LOCKSS 2.0-alpha2.

Can I use my own PostgreSQL database?

Can I use my own Solr database?

Yes, likewise, you can run an included Solr database, but you can can also configure it to use your local or institutional Solr database.

Can I replay Web content with my own Pywb instance?

Yes, you can configure your own Pywb instance to connect directly to the LOCKSS Repository Service, or you can use the included Pywb instance, or you might choose not to run Pywb at all.

Can I replay Web content with my own OpenWayback instance?